For the 2018 Winter Olympics in Pyeongchang, Gearlounge – RME's official distributor in South Korea – worked closely with Sound One Music Audio Post Production, a full-service audio provider based in Seoul, South Korea. While Sound One was responsible for controlling the entire playback system and the final audio signal for the OBS (Open Broadcaster Software) during the opening and closing ceremony at the PyeongChang Olympic Stadium, Gearlounge advised the Sound One specialists on the ideal sound system in advance.

One of the world's biggest sporting events

At a global event such as the Olympic Games, organizers and spectators expect nothing less than perfection – both in terms of content quality and signal stability. The MADI format, which was used both on the main console and for the OBS, dominated the signal flow. Based on these requirements, Gearlounge advised Sound One on the optimal choice of equipment. Together they finally decided on the RME Fireface UFX+ interface with comprehensive MADI I/O connectivity. 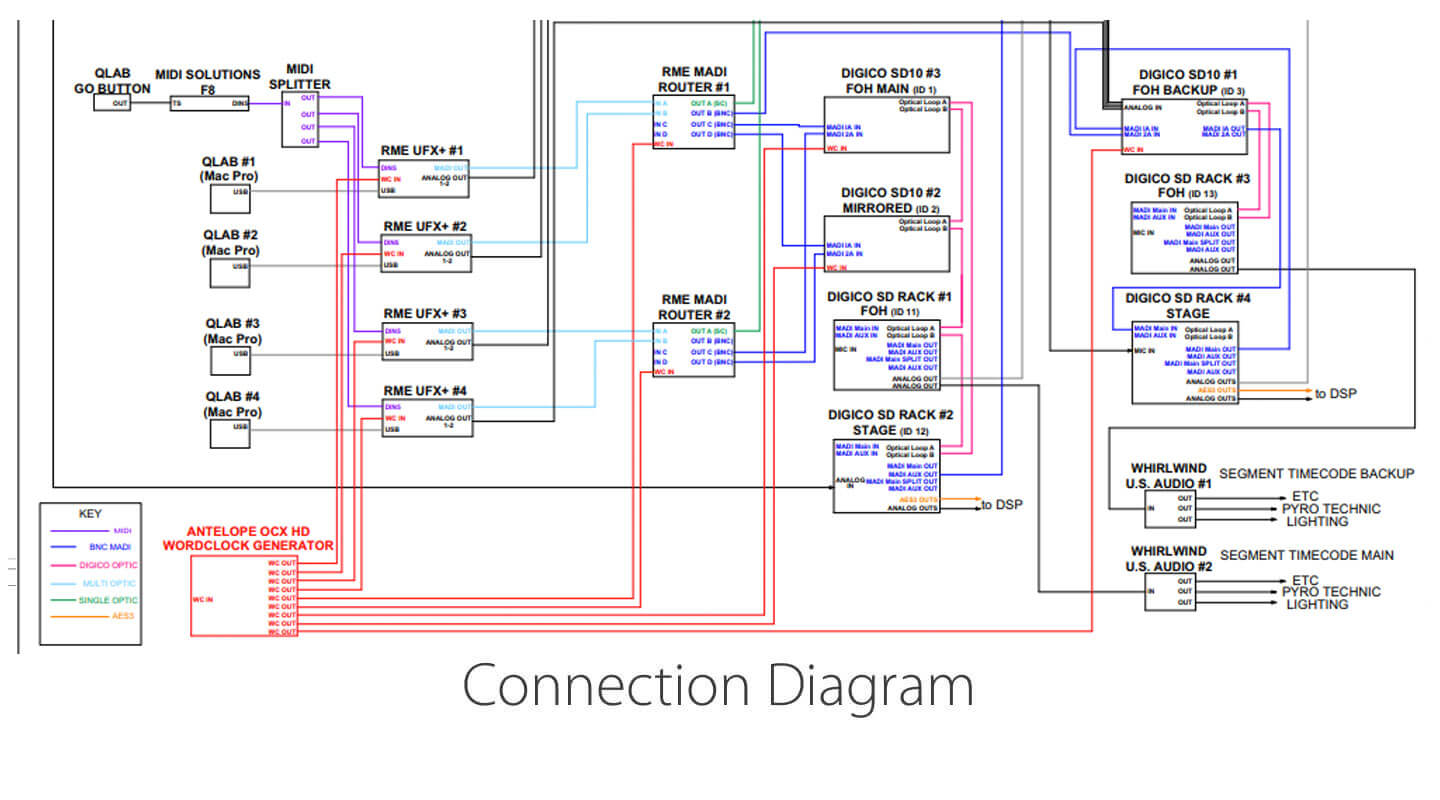 To avoid errors and failures on the broadcast side, a total of four Mac Pros were planned (1 for Main, 3 for Backup). For this reason, the Fireface UFX+ had to be integrated via the Thunderbolt connection of the Apple computers and provided mirrorable MADI outputs, various MIDI inputs, headphone monitoring as well as analog inputs and outputs for data backup. For programming and controlling the playback, Sound One used the cue-based QLab software from Figure53.

Cascaded mode in order to control the Playback

To synchronize the four identical Mac Pros (software and hardware settings), a custom transport remote control was used. The remote control signals were converted to MIDI and sent to the MIDI input of the respective Fireface UFX+. Three of the four interfaces were operated in cascaded mode in order to control the playback functions of all four QLab software units in parallel.

All QLab units were used in multi-channel mode and played back the playback signals via RME's TotalMix FX software and the MADI ports of the Fireface UFX+. In addition, all coaxial and optical MADI outputs were mirrored. 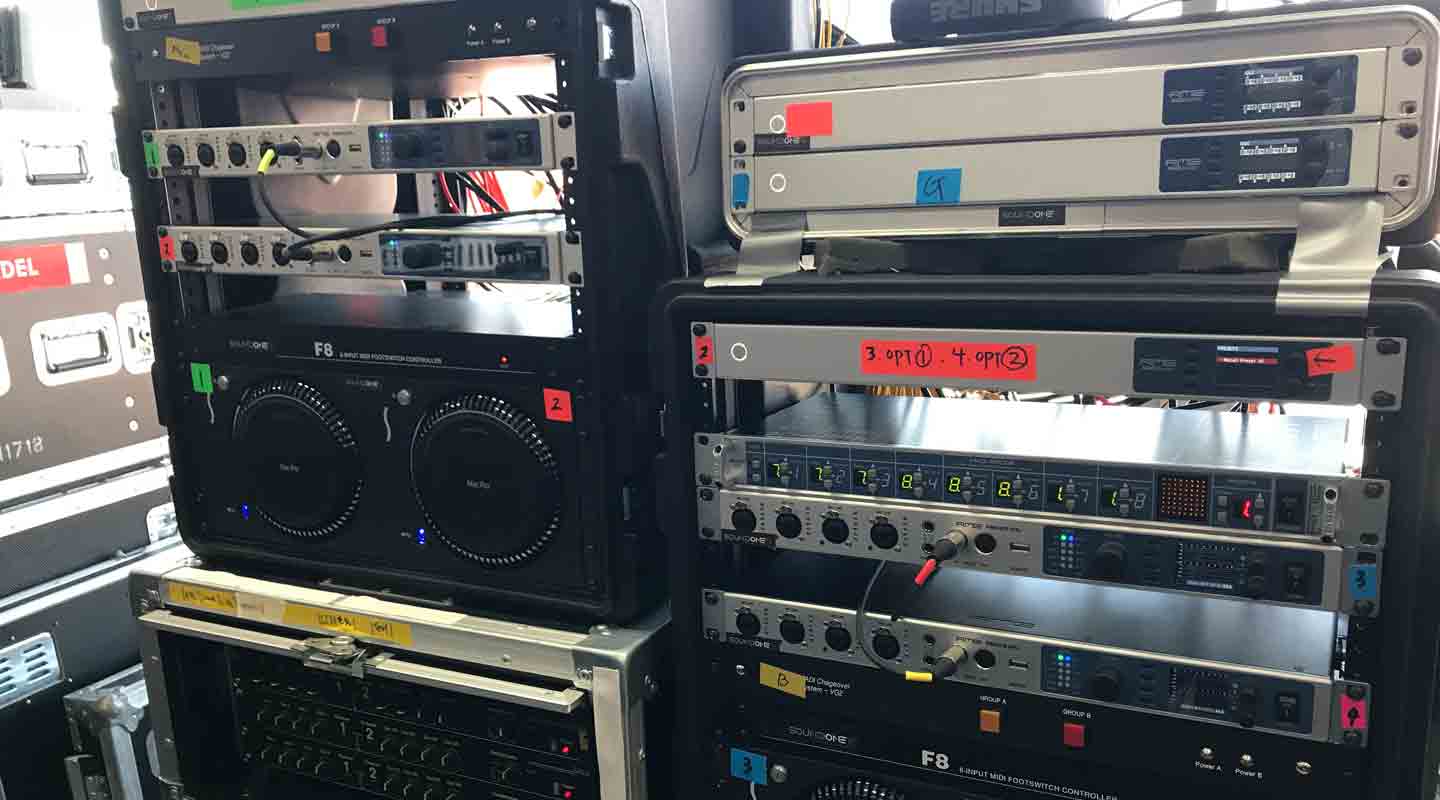 An insight into the sound setup: Fireface UFX+ interfaces in combination with MADI Bridge and MADI Router units from RME Audio

Maximum flexibility from the RME System

After merging the four MADI signals of the individual UFX+ interfaces, the combined signal was sent as an optical signal to the OBS and via BNC connections in single mode (specially adapted from multi to single mode by RME) to the three mixing consoles for the stadium sound system. The routing of the signal to coaxial and optical inputs including switching required maximum flexibility from the RME systems. With its 4 inputs and outputs with coaxial, optical and RJ45 options, the powerful MADI router with its comprehensive routing matrix met these requirements with maximum flexibility.

On this basis, Sound One was able to cover even the most demanding applications, such as the parallel transmission of MADI signals to three live consoles and two OBS instances via a total of five MADI outputs using two MADI routers.

Although RME's MADI solutions are regularly used in conjunction with QLab software, the opening and closing ceremonies in PyeongChang were the first Olympic endurance test. The organizers were consistently satisfied with the system used, which guaranteed enormous performance and flexibility with maximum reliability at an affordable price. The staff from comparable international sporting events were also impressed by the RME technology and Sound One's ability to smoothly stage one of the world's biggest sporting events. This is one of the reasons why the organization team of the Jakarta Asian Games 2018 showed great interest in this system.