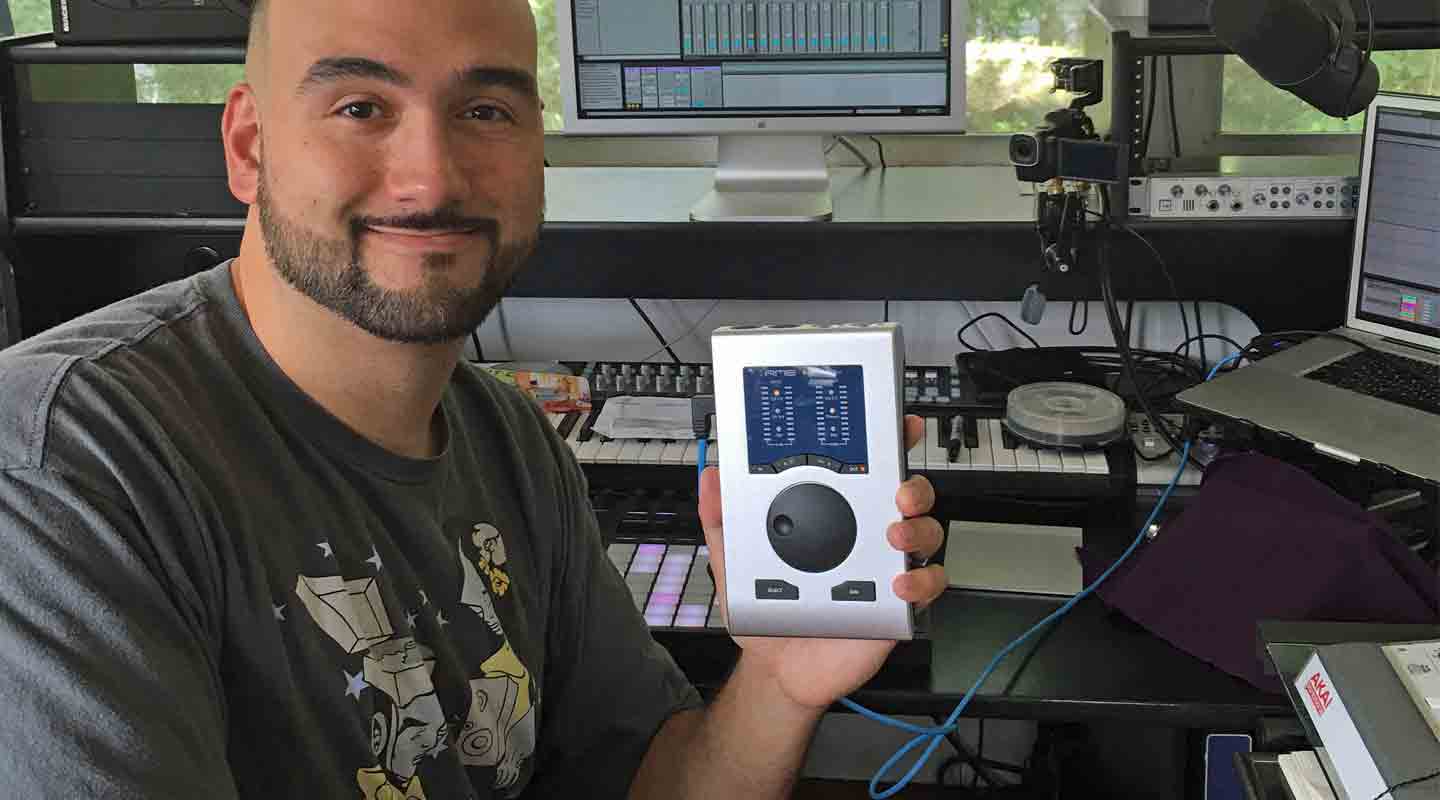 Audio quality, flexibility, and build quality with the Babyface Pro

As a founding member and producer of the Orlando-based Hip Hop group Solillaquists of Sound (http://solilla.com), DiViNCi first gained notoriety by using drum machines and sequencers in ways the world had never seen before. The virtuosity in his frenetic performances and popular YouTube™ clips set inspiring precedents for the now popular “Controllerism” scene. His work - both on and off the stage - caught the attention of numerous music industry luminaries, including Grammy® Award-winning icon Ms. Lauryn Hill, who tapped DiViNCi to join her band and studio team. Known for his top flight production skills, DiViNCi can choose any equipment he likes – and that’s precisely why his USB audio interface of choice is the RME Babyface Pro, distributed throughout the US by Synthax, Incorporated.

The perfect interface for live shows and workshops

DiViNCi has had his Babyface Pro just a short time and originally intended to use the interface for live shows and the workshops he conducts. However, as he is currently working on four different albums, most of his time lately has been spent in the studio. “I’m not doing a lot of recording at the moment,” he explained, “mostly writing music and mixing. So for the most part, I’ve used the Babyface Pro as a means to monitor my work, both through the main outputs and via headphones. Because I wind up working in a bunch of remote places, my in-ear monitors get used often. A great high-quality headphone output is essential for me, and this is something that a lot of companies tend skip over when designing their products. Not only does the Babyface Pro provide me what I need in that department, but the fact that they provide two headphone outputs - one ¼-inch and one 3.5 mm - is just icing on the cake.”

Presently, DiViNCi’s workstation setup is comprised of an Apple 17-inch MacBook Pro with 2TB of SSD space and his primary music application is Ableton Live. This affords him a potent system that is highly portable – and the Babyface Pro’s compact form factor ties perfectly into the equation. He commented on the Babyface Pro attributes that he finds particularly appealing. “First and foremost, the size and build quality really surprised me,” he reports. “It’s remarkably small and light and yet it’s built like a tank. I like how it manages to be both strong, powerful, and dare I say, petite simultaneously.”

“And it may seem like a trivial thing to focus on,” DiViNCi added, “but since I travel so much, I think the carrying case and how nicely everything fits inside may be my favorite part. Plus, I like the idea that something so ideally sized and built also gives me the best possible audio quality in its class of interface. I like to work knowing there’s nothing else out there that could do the job better, and the fact that the included TotalMix FX software provides the functionality of a hardware mixer, self-powered FX, and any routing I could think of is absolutely killer. This interface is super flexible.”

Not only is DiViNCi fond of his Babyface Pro, his business associates have been equally impressed. “Before I really got to use the Babyface,” DiViNCi said, “my friend and fellow producer/engineer, X:144, was in need of an interface with clean mic preamps to acoustically measure his room for tuning. He actually uses the RME HDSPe MADI card in his main setup and felt like my Babyface would be able to handle the work he needed to do. He clearly liked the interface because while he said he only needed it for a week, I didn’t wind up getting it back for over a month! This didn’t benefit me as much, but as I hold his ears in very high regard, it was a nice testament to the capability of the unit. Additionally, I recently went to Honduras to conduct some producer workshops and it was great to have the Babyface with me. There were a ton of situations where I needed a good interface – and one that I could also carry with me.”

Given the level of sophistication in today’s electronic equipment, questions inevitably arise. Here too, DiViNCi is quite enthusiastic about the quality of Synthax’ customer and technical support. “I honestly haven’t had to ask too many technical questions, “he says, “as everything is pretty straight forward. However, I am really refreshed by the level of interaction I’ve had with the people from Synthax. It is definitely one of my favorite experiences working with a company like this. They have been very proactive and responsive.”

In summing up his experience thus far with his Babyface Pro, DiViNCi offered these final thoughts, “I often find that a piece of gear is good for what I got it for, but not so much in the unique scenarios that pop up along the way. I’ve had the opposite experience thus far with the Babyface Pro. Because of my recent obligations, I haven’t even had the opportunity to really use the interface for what I originally intended. But in the meantime, it’s proving to be useful and capable for other scenarios that I hadn’t planned for. It’s like a little Swiss army knife of an audio interface. The combination of the unit’s audio quality, flexibility, and build quality—and the customer care I’ve received— makes me really confident that I can depend on this unit to evolve with my requirements.”