RME’s MADI-based systems deliver incredible reliability, particularly in applications where failure is not an option. Further, MADI can cover extremely long distances with a single cable — minimizing the need for heavy analog snakes. Deploying a MADI set up also means faster set up and tear down. Since MADI is open standard, it also makes finding and replacing cables more convenient.

RME products are known for their reliability and their unique feature sets. Acknowledged by professional users and hobbyists alike, their digital interfaces and analog converters capture, transport and play back audio with exceptional quality - for which they have received numerous awards. After having also been included in many scientific and industrial applications, RME has set a standard much talked about whenever the focus is on uncompressed, high quality audio.

In recent years the MADI protocol has established itself as an incredibly robust and powerful tool for recording engineers, musicians and audio professionals. The ability to send a high number of channels via a single, compact cable has already made MADI a popular format for broadcasting. It’s now found its way into studios and live rigs around the world, and has become an industry standard in high-end audio. In this feature, we’re taking a look at what makes MADI such a useful and powerful protocol for anyone faced with the task of transferring large numbers of channels of high-quality audio.

MADI is the Pro Audio Industry standard for multichannel audio. The MADI standard was defined by the AES (Audio Engineering Society). Many factors have influenced the increasing importance of MADI in pro audio production systems. These include an overall growth in the use of digital audio equipment, and the ever increasing demand for greater numbers of audio channels in large productions. Surround sound production has also raised the requirements of multi-Channel applications. MADI is an attractive and convenient interface technology, as it provides the simplest method of transmitting 'sample accurate' audio channels over long distances. The balance between operating distances, installation costs and overall maintenance is exemplary.

With its architecture directly related to the AES3 (AES/EBU) audio protocol and its widely available consumer equivalent S/PDIF, MADI is a format that provides sim-plicity, extremely low latencies and ease of use across short and long distances.

MADI is designed to send up to 64 audio channels at 48kHz sampling frequency (32 channels at 96kHz, 16 channels at 192kHz) from one device to another device in a unidirectional data stream. This distinguishes MADI signals from so-called “network audio protocols” that require user interaction to send audio signals between several audio devices once they have detected each other in a local area network.

The fact that MADI is a point-to-point protocol simplifies the design of digital audio devices, and brings several benefits for the user: 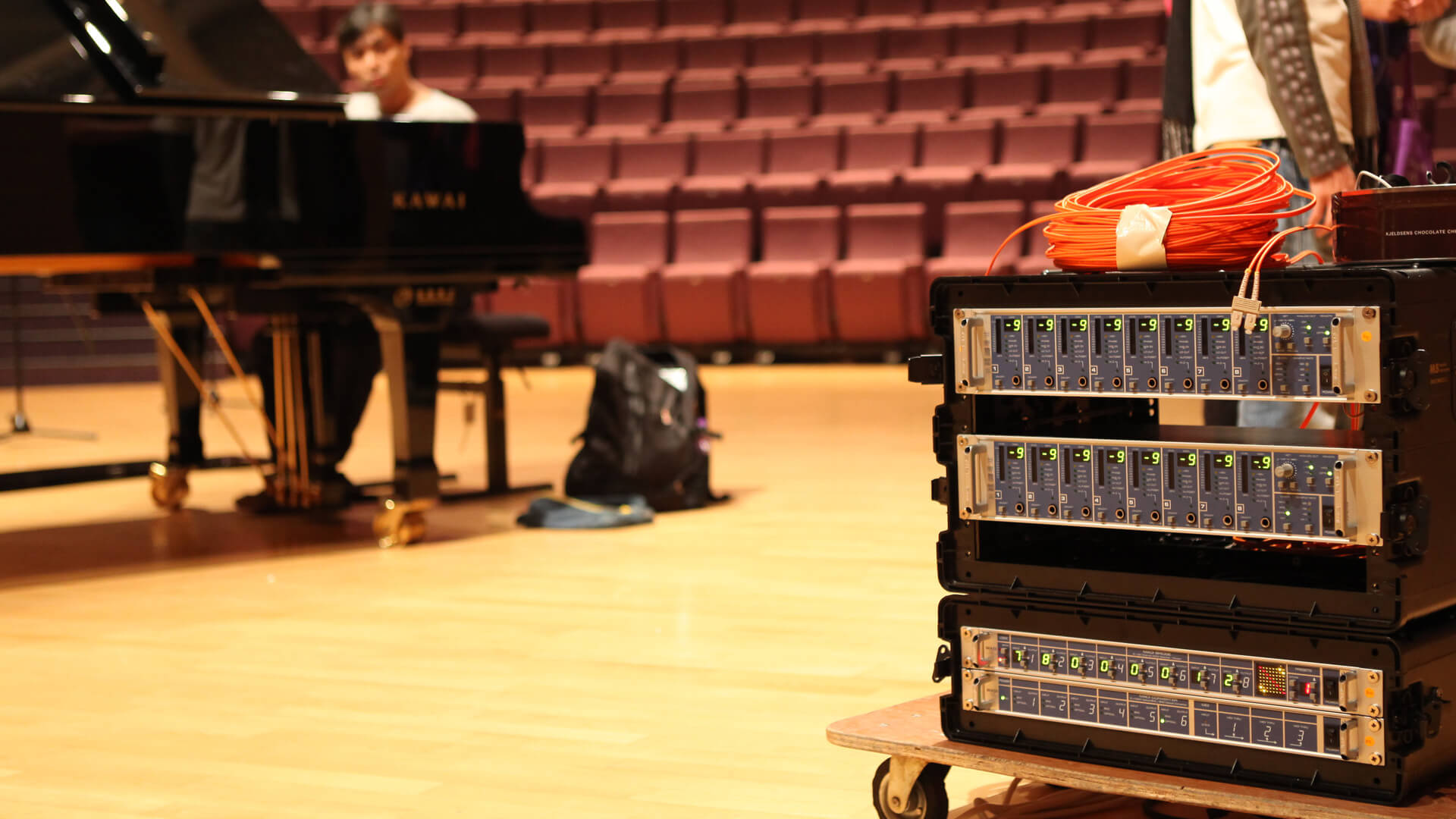 In its current revision, the MADI standard suggests two types of cables, optical and coaxial. Both have been supported by RME since 2003, when RME released its first MADI computer interface card HDSP MADI, and its first ADAT-MADI converter ADI-648.

In a MADI system, each device detects the complete 64 channel stream at its input, and creates a new stream at its output to send it to the next device. If some channels should be passed on through a device, they are simply copied from input to output without any alteration by the device. On the following pages, you are guided through some common MADI systems - please keep in mind that each product may be used in a variety of different ways.

All cables carry the same information and achieve the same signal quality, the type of cable is therefore a question of convenience, budget and compatibility. Optical cables have the advantage of being galvanically isolated, extremely lightweight and available in lengths of up to 2000m. 75 ohms coaxial cables are robust, feature a locking mechanism and are widely in use for word clock and video cabling.

They normally bridge distances of up to 100m. Twisted pair cables are very affordable and often already integrated into the existing building infrastructure. Depending on the classification of the cable, lengths of more than 150m can be used. 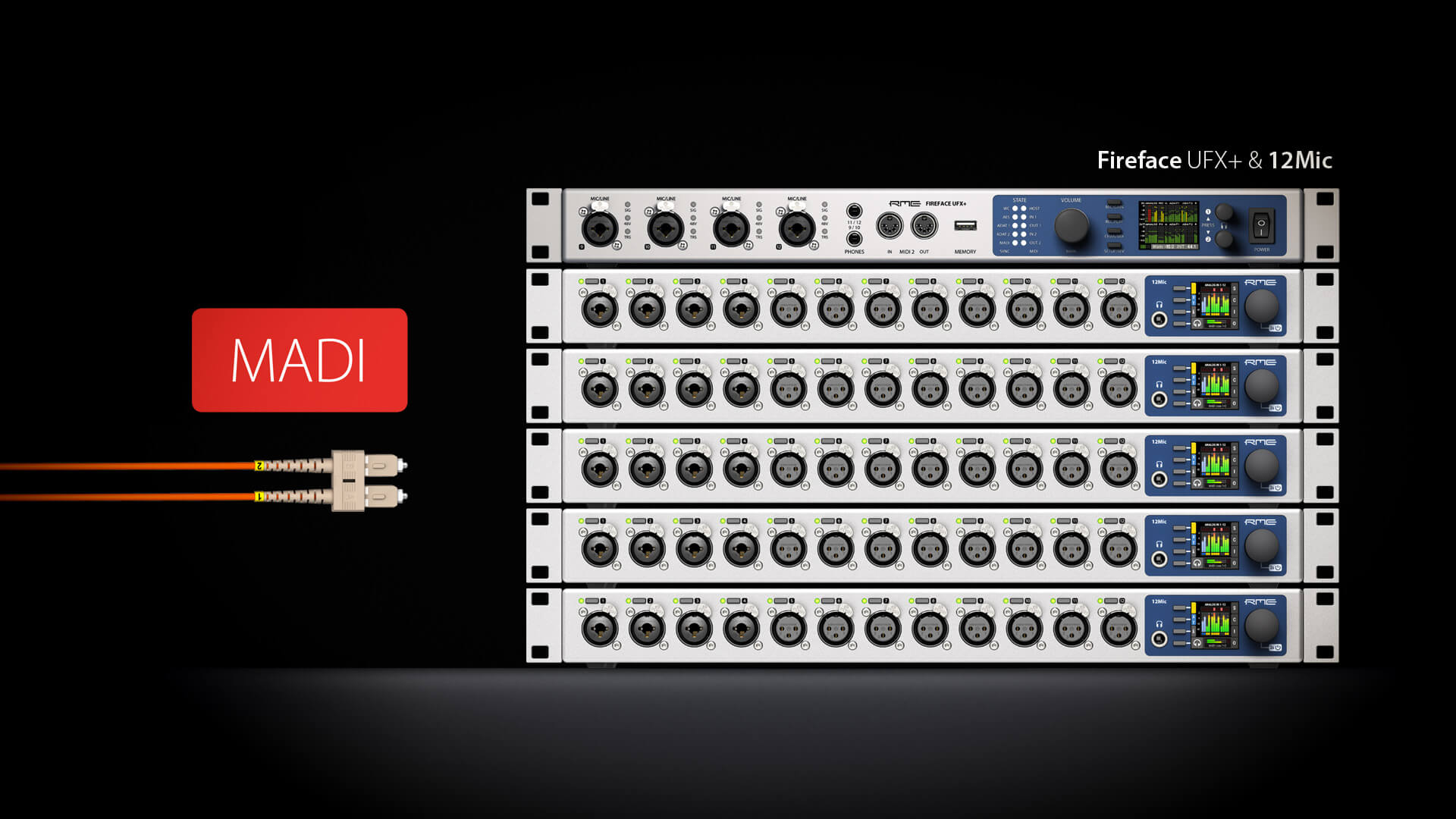 What advantages does MADI have over a traditional multicore cable?

Let’s take the example of a production company at an outside event running multiple channels of audio, with the signals being fed to a truck for recording and mixing, parked in a car park some several hundred metres away. The traditional solution is to use an analogue multicore cable to transfer each channel back to the recording truck. However, due to the nature of multicore cables, there are a few potential problems with this method – problems that are simply not an issue with MADI.

For example, as multicores are made up of many individual analog cables, interference from nearby power cables can introduce unwanted noise into the audio signal. Also, if one of the cables develops a fault, it can be a very time-consuming process to find the problem cable within the group. As a digital cable, MADI on the other hand can be comfortably laid alongside or across power cables with no alteration to the signal, and doesn’t suffer from the problem of individual channel loss. MADI cables are also much cheaper than multicores due to being a single cable, so if a fault were to occur, the cost of buying a replacement is far less than that of replacing a multicore.

Multicore cables are also physically bulky and can be quite heavy, particularly for long cable runs. The weight can make them difficult to work with, possibly even needing several people to load and unload, especially if multiple runs are used. MADI cables are light and slim by comparison, which makes them much easier to work with, and much faster to deploy.

RME MADI Solutions - Usage and Applications PDF
Back
This site uses cookies. By continuing to browse the site you are agreeing to our use of cookies. More Info